The Mysteries of New Jerusalem 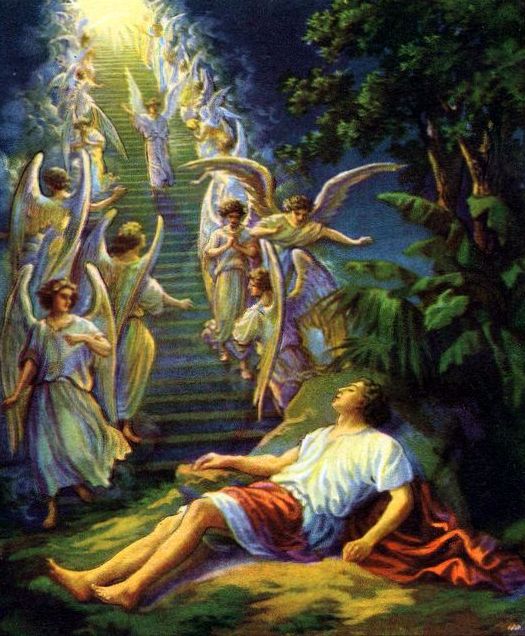 Chapter 17, Part 4: Is the account of Jacobs Ladder only a cute little story that you tell children about, or is there something far more intriguing about it? Why is it that Jacobs dream is viewed as a second rate dream? Could it literally be the highway to the New Jerusalem; The Highway to Heaven? Lets read this short account of the dream:

Genesis 28:10-19 Jacob left Beersheba and headed toward Haran. 11 He came to a certain place, and stayed there all night, because the sun had set. He took one of the stones from the place and put it under his head, and lay down in that place to sleep. 12 As he dreamed he saw an elevated highway [1] stationed on the earth, and its top reached to heaven! Amazingly, the Messengers of Elohim were ascending and descending on it! 13 Yehovah [Yeshua / Jesus] stood above it and said, “I am Yehovah, the Elohim of Abraham your father, and the Elohim of Isaac. I’m going to give the land you are lying on to you and your descendants. 14 Your descendants will be like the dust of the earth, and you’ll spread out to the west and to the east and to the north and to the south. Thru you and your descendants, all the families of the earth will be blessed. 15 I’m with you, and I’ll watch over you wherever you go, and bring you back to this land! I won’t leave you until I’ve done what I’ve promised you. 16 Jacob awakened from his sleep, and he said, “Surely Yehovah is in this place, and I didn’t know it”, 17 and this is the GATEWAY [1] [entrance] to heaven! 18 Jacob got up early in the morning and took the stone he had put by his head and set it up as a marker [pillar] and poured olive oil on top of it. 19 He renamed the place Bethel [Home of El, {Elohim}], tho previously the name of the city had been Luz.The Gabriel Version

[1] The word usually translated as ladder only occurs once in the Bible. A better clue to its meaning can be had by checking the root word that it is taken from, that is used a dozen times and literally means: An elevated highway or way.

Bethel is the second most-mentioned city in the Scriptures, mentioned 73 times. Its a place that Jeroboam later defiled:

What connection is there between the gate in Bethelbeth is house; el is eloihimor House of El [Elohim] and the House of Elohim (God), mentioned 87 times thruout the entire Bible, in reference to the Temple in Jerusalem? Bethel certainly isnt another name for Jerusalem:

2 Kings 23:4 The king ordered Hilkiah the high priest, and the priests of the second order, and the gatekeepers to remove from the 'Temple' of Yehovah all the vessels that were made for Baal, the grove poles, and the entire army of heaven, and he burned them outside of Jerusalem in the fields of the Kidron, and hauled their ashes to Bethel [where Israels idolatry began].

Could it be that Jacob actually saw in a vision, a highway to New Jerusalem, established on the TOP of the mountains, an incline literally beginning in ancient Bethel (modern day Al-Bireh), about 9.3 miles north of Jerusalem, (not really 11 miles), that would reach to directly above Jerusalem? When Jacob was awake he said: This is none other than the House of Elohim, AND this is the GATEWAY [entrance] to heaven! So he saw the ladder as well as the destination, Elohims very house!

Micah 4:1-3 1 In the future, at the end of the 'age', the mountain of Yehovah’s House [New Jerusalem] will be established on the summits of the mountains, and will be borne above the hills, and all nations will beam [or flow] into it. 2 Many nations will come and say, ‘Come, let’s go up to the mountain of Yehovah, to the Elohim of Jacob’s house, and He’ll teach us of His ways, and we can follow in His 'steps'.’ “The Torah [instruction] will go out from Zion, and the Word of Yehovah from Jerusalem. 3 He’ll govern the nations, and 'settle the feuds' of many far off nations. They’ll beat their swords into plowshares [actually harrows] [1], and their spears into pruning hooks. Nations won’t raise their swords against other nations, and they won’t learn warfare any more.

Yeshua (Jesus) also mentioned a gate and a way which leads to life. Why could this not be both a literal and a figurative reference to Jacobs Gate of Heaven?

The following verse makes perfect sense only if an odd but very common rendering is changed. The primary meaning of the Greek word epi is translated in this verse as upon. Yet it also can mean before, by or to, which makes sense here. The Aramaic translations say to.

John 1:51 ... He added, I tell you with absolute certainty that in the future, youll see the sky open and spirit messengers of Yehovah ascending and descending to the Human Son.

I cant really see Yeshua saying: Who wants the next piggy back ride to heaven? Tho Yeshua did say I am the way [or highway], and truth, and the Life, no one comes to My Father, other than thru Me (John 14:6).

Even the footnotes in my Nelson Study Bible come close to being literal about this verse where it says:

Jacob had a vision of angels ascending and descending a ladder from heaven (Gen.28:12). The thought here is similar, namely that there will be communication between heaven and earth.

There will be far more than communication!

(As a side notewhy would there not be literal gates of hell [Matthew 16:18 KJV] leading to the lake of fire?)

Look at the significance of the word gate in Greekit is not a barnyard gate; rather it is a very impressive gate. Also the word enter in Greek denotes a passageway, both entering and exiting a house or a city. It is not a one way street. Furthermore way is primarily a literal reference to a road but it also is used figuratively of a course of action leading to a spiritual destination. Have it both ways!

Jacob named the place of his dream Bethel, which means: the House of Elohim. The things that Jacob said about this place were not soon forgotten. Notice what Eastons Revised Bible dictionary has to say about Bethel:

A place in Central Palestine, about 10 miles north of Jerusalem, at the head of the pass of Michmash and Ai. It was originally the royal Canaanite city of Luz #Ge 28:19 The name Bethel was at first apparently given to the sanctuary in the neighbourhood of Luz, and was not given to the city itself till after its conquest by the tribe of Ephraim. When Abram entered Canaan he formed his second encampment between Bethel and Hai #Ge 12:8 and on his return from Egypt he came back to it, and again called upon the name of the Lord #Ge 13:4 Here Jacob, on his way from Beersheba to Haran, had a vision of the angels of God ascending and descending on the ladder whose top reached unto heaven #Ge 28:10-19 and on his return he again visited this place, where God talked with him #Ge 35:1-15 and there he built an altar, and called the place El-beth-el (q.v.). To this second occasion of Gods speaking with Jacob at Bethel, #Ho 12:4,5 makes reference. In troublous times the people went to Bethel to ask counsel of God #Jud 20:18,31 21:2 Here the ark of the covenant was kept for a long time under the care of Phinehas, the grandson of Aaron #Jud 20:26-28 Here also Samuel held in rotation his court of justice #1Sa 7:16 It was included in Israel after the kingdom was divided, and it became one of the seats of the worship of the golden calf #1 Ki 12:28-33 13:1 Hence the prophet Hosea #Ho 4:15 5:8 10:5,8 calls it in contempt Beth-aven, i.e., house of idols. Bethel remained an abode of priests even after the kingdom of Israel was desolated by the king of Assyria #2 Ki 17:28,29 At length all traces of the idolatries were extirpated by Josiah, king of Judah #2 Ki 23:15-18 and the place was still in existence after the Captivity #Ezr 2:28 Ne 7:32.

To add even more credibility to this childrens story, compare what Yehovah told Abraham with what He told Jacob:

Genesis 13:14-16 Yehovah told Abram, after Lot had left him, Look 'all around' from the location where you are—north and south, east and west, 15 because all the land that you can see I’ll give to you, and to your descendants forever. 16 I’ll make your offspring as the dust of the earth, so that if anyone can count the dust of the earth, then your descendants can also can be counted.

Genesis 28:12-14 As he dreamed he saw an elevated highway [1] stationed on the earth, and its top reached to heaven! Amazingly, the Messengers of Elohim were ascending and descending on it! 13 Yehovah [Yeshua / Jesus] stood above it and said, “I am Yehovah, the Elohim of Abraham your father, and the Elohim of Isaac. I’m going to give the land you are lying on to you and your descendants. 14 Your descendants will be like the dust of the earth, and you’ll spread out to the west and to the east and to the north and to the south. Thru you and your descendants, all the families of the earth will be blessed.

[1] The word usually translated as ladder only occurs once in the Bible. A better clue to its meaning can be had by checking the root word that it is taken from, that is used a dozen times and literally means, “An elevated “highway” or “Way”. Yeshua will fulfill this ( 1:51).

These declarations both took place in Bethel! Abraham visited Bethel on more than one occasion. (Genesis 12:8, 13:4). He journeyed there while traveling to Mesopotamia and Egypt. The promise all the clans of the earth will be blessed was given to both Abraham (Genesis 12:3) and Isaac (Genesis 26:4), and now to Jacob!

I tried to see if anyone on the net had considered that this dream might have some literal fulfillment, and I didnt find anything, but I did find similar information to the following quotation from several sources:

The Jacobs ladder is one of the most ancient and famous of folk toys. Legend has it that one was found in King Tuts tomb, which means these fascinating toys were played with in Egypt before 1352 BC, when the young king died (at about 18 years old). Its amazing to me that this humble folk toy would have been included among Tutankhamens most significant effects, along with brilliant jewelry, amulets, masks of pure gold, prized objects dart, a solid gold coffin, statues, furniture, and even a full-sized chariot.

Jacobs ladders, named for the biblical Jacob who saw a ladder leading from earth to heaven in a vision, have shown up all over the world. Like the spinning top, the Jacobs ladder seems to be universal, appearing at widely divergent world locations with no apparent historical connectedness.