Who Were the First Century Nazarenes? 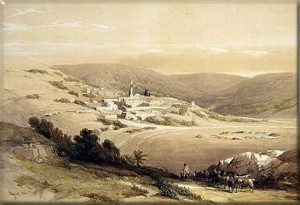 Chapter 41, Part 2 Preview: After Yeshua (Jesus) was crucified, the people who claimed to be His followers were soon divided into two camps: Nazarenes and Christians. Both terms are found in the Bible.

Later, the Nazarene Way is again spoken of as an evil sect:

Acts 28:22 But we would like to hear what your views are, because we know that people everywhere are speaking out against this doctrine [2]. The Gabriel Version

[2] The Greek translates this as either sect or heresy. Lamsa completely warped this verse. I only spot checked Lamsa.

Neither Yeshua or any of the kadishea (saints) in Jerusalem were ever called Christians. We know that Yeshua was a Nazarene, He inspired that into the record.

Matthew 2:23 He came and lived in a town called Nazareth. This fulfilled what was fortold by the prophet [Singular: Isaiah], Hell be called a Nazarene.

The first 15 pastors of the Jerusalem Assembly were all of Jewish descent. As shown below, they would never have called themselves bishops. For obvious reasons they were all very short lived. Presumably these leaders were selected from the Nazarene Sanhedrin, a group alluded to in Luke 10:1-17. A group of seventy apparently served as elders until the diaspora. But the bishops of the circumcision ceased after 70 AD according to v.3 of the following link.

[v] 2. But I have learned this much from writings, Reuterdahl (De Fontibus Hist. eccles. Euseb., p. 55) conjectures that these writings were found in the church of Jerusalem itself, and compares a passage in the Dem. Evang. III. 5: The first bishops that presided there [i.e. at Jerusalem] are said to have been Jews, and their names are preserved by the inhabitants of the country. ... until the siege of the Jews, which took place under Adrian, in 135 a.d. (see chap. 7) there were fifteen bishops in succession there.... Christian Classics Ethereal Library

The Assembly in Jerusalem went from almost 100% Jewish to 0% Jewish overnight. If there is an historic quote that epitomizes what happened to the Assembly that existed at the birthplace of the Nazarene religion it would be here:

... after the death of Symeon, the last prominent relative of Christ, the presbyters took the lead, and that they were afterward made by tradition into successive monarchical bishops. Closs and Gieseler suppose that there were bishops of a number of churches in Palestine at the same time, whom tradition made successive bishops of Jerusalem. But the fact is, that the episcopate is of Greek, not of Jewish, origin, and in the strictly Jewish Christian churches of Palestine no such person as a bishop can have existed. Only after the church there came under the influence of the Gentile church, and lost its prevailingly Jewish character, was it possible for a bishop, in the general sense of the term, to exist there. The Jewish Christians [Nazarenes] assumed for their church government the form of the Jewish Sanhedri[n], though while James and Symeon were alive, they were naturally leaders (according to the common Oriental custom, which exalted the relatives of the founder of a religion). The Jewish character of the Jerusalem congregation was very marked until the destruction of the city under Hadrian (note that all but two of the fifteen bishops have Jewish names), after which all circumcised Jews-Christians as well as unbelievers-were excluded, and a heathen Christian congregation took its place (see the next chapter). According to Stroth, followed by Closs, Stigloher, and Heinichen, the church of Jerusalem remained in Pella after 70 a.d., and was called the church of Jerusalem because it was made up of Christians from Jerusalem. This is possible; but Eusebius evidently did not understand it so (compare, too, his Dem. Evang. III. 5), and Epiphanius [a Nazarene] (de Mensa et Pond. chap 15) says expressly that, after the destruction of the city by Titus [70AD], the church returned again to Jerusalem, and there is no good reason to doubt the report. Note #997: Christian Classics Ethereal Library

[v] 4. And thus, when the city had been emptied of the Jewish nation and had suffered the total destruction of its ancient inhabitants, it was colonized by a different race, and the Roman city which subsequently arose changed its name and was called Ãlia, in honor of the emperor Ãlius Adrian. And as the church there was now composed of Gentiles, the first one to assume the government of it after the bishops of the circumcision was Marcus. Christian Classics Ethereal Library>

Satan has a tactic that has worked for him very well to this daydisinformation. In order to discredit the truth, offer many alternatives. Offer some close counterfeits to ensnare those approaching the truth and offer a wide variety of even more popular flavors to dilute the truth. The more variations of a matter that are out there, the better. So even among the Jewish Christians there were quite a few options.

According to New Advent Catholic Encyclopedia The Ebionites split away from the Nazarenes, tho the fathers used the names somewhat interchangably. The Ebionites naturally retained considerable truth, such as the Sabbath and the importance of the Torah, but they taught Unitarianismthey denied that Yeshua was Eternal and His virgin birth. Furthermore they rejected the teachings of Paul. Eventually they even de-emphasized the Torah. Origin was the first to write of the split among the Nazarenes. Eusebius also noted the distinction. Epiphanius (actually a Nazarene) is said to have called the Ebionites more heretical than the Nazarenes, because these same departures of the Ebionites from the Nazarenes happened to also be condemned by the Catholics. Of course the way that Epiphanius is quoted, would necessitate him being adopted into Catholicismafter his death.

While I wouldnt take offense being called a Christian, Nazarene would be a more acceptable and applicable name, but I call myself one of the kadishea (saints).

Isaiah 8:16-18 In a time of distress, bind up the Testimony and put a seal on the Torah among My disciples. 17 Ill wait for Yehovah, who has turned away from the descendants of Jacob, and Ill eagerly look for Him. 18 I and the children [disciples] who Yehovah has given Me are for signs and miracles in Israel from Yehovah the Commander, who lives on Mount Zion!

Acts 19:9 Some of them were hardened, refusing to believe, and spoke evil of the Way of Yehovah before the assembly. So Paul left them, and separated the disciples from them. He had daily discussions [Gr. dialegomai] with them in the school of a man named Tyrannus.

Perhaps you have cringed for years when calling yourself a Christian, because you dont really identify with them, but lacked the term of distinction. Why not simply refer to yourself as one of Yeshuas kadishea, and let others call you what they may?

So what is the bottom line?The kadishea understand that the Rule of Law is the Rule of Logic. The entire universe operates on logical rules. Physical laws can be temporarily suspended if Yehovah so decides, these exceptions are called miracles. When true miracles happen you actually experience the existence of the Law giver. Yet Yehovah never breaks a spiritual law. That is the only way that Yeshua even qualified to be the Messiah. He never broke a single spiritual Law.

When a Greek Bible says that Yeshua was the Word, it is saying that He is the Logos, this is where we get the word logical.

A logical Creator would have a logical reason for creating the human race. Logic would never say, OK, Im going to create humans, and My ultimate objective is for them to say the magic words, Save me Lord Jesus, and if they say that, then they can join Me in Heaven when they die.

A scientist sets up an experiment and then watches the resultsthen comes his judgment. That is pretty much what Yehovah is doing with project earth. It is simply inescapable that some of us have a spirit nature that is salvageable and some do not.

A logical mind, one motivated entirely by love, would think very much like these words in the human realm:

Rule of law [is a] doctrine that no individual stands above the law, and that all rulers are answerable to the law. This is one of the major legacies of the constitutional system. The rule of law can also be understood as the belief that there is a universal standard of justice, equality and impartiality, against which all governments and governmental actions may be measured.

After a great disappointment, after Angels mutinied, Yehovah decided to make beings of flesh that could be tested to see how much they gravitated towards love. Of course none are expected to be perfect, but we all inevitably move either toward the light, like a moth or are repelled from it, like savage beasts! The test tube is called earth. From our first breath we are rapidly exposed to Satans ways, a philosophy of life that seeks the self firstno matter what. Those who show thru their actions that they long for justice, equality and impartiality are the ones who will be spared. Those who seek self gratificationat the expense of othersliterally abort their own eternity!

It is really that simple! Need Biblical proof? You should. Read Are the Unsaved Lost?, the most astonishing segment of this site.

The ultimate set of Laws of all time are the ones that Yehovah handed to Mosesthe ones carved into stone by His own hand. Dont dismiss them due to the Christian doctrine of antinomianism. That is simply the politically correct name for spiritual anarchywhether moderate anarchy or complete anarchy.

I was born into a strict Nazarene familythe Protestant Church variety. When I was about 17, my parents sent me to see a wise man to try to figure out what was wrong with me. I still toted a Bible everywhere I went, but had forsaken most of the traditional beliefs of my familybeliefs that the patriarch of the family, 100 years ago, had helped establish in the church presently headquartered in Kansas. I told him that I must be the last Puritan, but that it might take the rest of my life to figure things out. Should someone call me a Nazarene today, I wouldnt be quick to correct them; but Id have to add, not the Kansas variety, but rather the variety presently headquartered in heaven and awaiting the promise given to Abraham.

Quotes from: The Most Important Jew of All

Albert Einstein: As a child I received instruction both in the Bible and in the Talmud. I am a Jew, but I am enthralled by the luminous figure of the Nazarene.

Joseph Klausner professor at The Hebrew University, Jerusalem and author:

Jesus was a Jew and a Jew he remained till his last breath. His one idea was to implant within his nation the idea of the coming of the Messiah and, by repentance and good works, hasten the end....

In all this, Jesus is the most Jewish of Jews ... more Jewish than Hillel.... From the standpoint of general humanity, he is, indeed, a light to the Gentiles.

Chapter 42 is Should the Congregation of Yehovah Have a Statement of Beliefs?