The Light Bringer Was Framed!

Article Preview: Has Satan deceived you about Lucifer? Lucifer, the light bringer, is not at all Satans name! Jerome amended the Latin Vulgate Bible to include a slight of hand trick that virtually no onemodern translators includedhas ever detected! The context is all about Satan being put to death (vs: 9,11,15,19). Satan had just told Yehovah (God) that he was going to ascend into heaven and take over the throne of the universe (v.13). Satan had also been attempting to steal the pre-incarnate Yeshuas (Jesus) rightful title light bringer, and Yehovah sarcastically called him that as He was condemning him to Sheol (the grave)!

In the English version of the Bible the name Lucifer appears only one time in Isaiah 14:12. This reads:

2. Lucifer is not an English word, but a Latin word. The question is: who gave the world this Latin name?

3. In A.D. 382 Pope Damascus commissioned the scholar Jerome to make an official revision of the Latin versions of the Bible that were floating around in the Catholic Church. Jerome went off to a cave in Bethlehem where he proceeded to make his translation, supposedly based on the Hebrew text, but in practice based very largely on the Septuagint version (i.e. LXX) that Origen had produced about 140 years earlier while in Caesarea. (The truth about the LXX is another subject that I have discussed in a separate paper.)

Anyway, by A.D. 405 Jerome had completed his work, which we today know as The Latin Vulgate Bible. It is far from an infallibly accurate translation of the original texts. Rather, it is an interpretation of thought put into idiomatic, graceful Latin!

For a thousand years this Translation was without a rival and herein lies the problem!

4. Jerome had understood that Isaiah 14:12 is talking about Satan. There the Hebrew word heylel is used and Jerome translated this into Latin as Lucifer!

This is a Mistranslation!

But this is not what the Hebrew word heylel means! Well see later exactly what this word does mean.

6. Anyway, as a result of this Latin Vulgate translation, which was almost the only version of the Bible in use throughout Europe for the next 1000 years, Satan popularly became known as Lucifer. It should be self-evident that when the first people who translated the Bible into English came along, one of their paradigms was that the name Lucifer applied to Satan. When they came to translate Isaiah 14:12 into English, they decided that rather than actually translate the word Heylel, they would simply substitute it with the already well-known (originally) Latin name Lucifer. And they could do this because on the surface this seems to be a reasonably accurate translation. But it isnt really!

7. I mentioned earlier that the word Lucifer appears only once in the English versions of the Bible. But in the Latin Vulgate translation of Jerome it appears twice! Thats right, twice! Where else is this word used and who does it refer to? Jerome certainly knew who it refers to. This knowledge also casts a dark cloud over his intentional use in Isaiah 14:12!

The two words day star are a translation of the one [compound] Greek word Phosphoros, [derived] from two Greek words:

9. Now lets note the dishonesty, first of the English translators and then of Jerome.

All of the English translators of the Bible know very well that the word Phosphoros in 2 Peter 1:19 can be perfectly accurately translated by the word Lucifer. Instead they have chosen to deliberately obscure this fact. Why?

They knew very well that 2 Peter 1:19 refers without doubt to Jesus Christ. This verse calls Jesus Christ Phosphoros (in Greek) or Lucifer (in Latin). Yet the translators have hidden this fact behind the words day star. The facts are that Phosphoros has absolutely nothing to do with either day or star! The translators simply borrowed a term that is elsewhere used for Christ namely morning star in Revelation 2:28 (Greek = proinos + aster) and in Revelation 22:16 (Greek = orthrinos + aster). 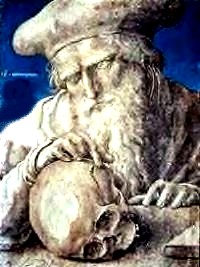 10. Now lets look at Jerome. The phrases quoted under point #8 above are translated by Jerome into Latin as follows:

Notice that Jerome correctly translated the Greek Phosphoros into the Latin word Lucifer. Jerome obviously knew that this verse refers to Jesus Christ, yet he wrote Lucifer with a small l and did not capitalize the word. He also knew that he had translated the word Phosphoros perfectly into Latin.

With this write-up I am including photo-copies of 2 Peter 1:19 and Isaiah 14:12 from the Latin Vulgate. (Comment: that is what I sent to Pasadena with the original write-up I sent through to them about 4-5 years ago. I cant really put photo-copies [in email]).

Jerome knew that in the New Testament Lucifer is a title for Jesus Christ; yet he still chose to also translate the less- clearly defined Hebrew word Heylel in Isaiah 14:12 as Lucifer, knowing that this word referred to Satan and here Jerome started the word with a capital L, as can be seen from the enclosed photo-copies.

So with Jerome Satan gets a name that refers to Christ with a capital letter and Christ gets His own name only with a small letter.

12. Halal is used 165 times in the Old Testament and it is translated as follows in the KJV:

This should make clear that the translators felt they should attach over a dozen different meanings to this word Halal. The meanings are both good and bad; both positive and negative.

Anyone who has studied what God tells us about Satan, should realize immediately that Satan is mad, boastful, a fool and foolish and he does rage. These words with which Halal is translated in numerous places, fit Satan perfectly.

The very next verses in Isaiah show Satan boasting! Read Isaiah 14:13-14! That is why God calls him heylel because he boasted! What could be plainer?

For thou hast said in thine heart, I will ascend into heaven, I will exalt my throne above the stars of God: I will sit also upon the mount of the congregation, in the sides of the north: I will ascend above the heights of the clouds; I will be like the most high (Isaiah 14:13-14).

13. Now here are some of the places where Halal is translated as:

14. It should be very clear by now that Heylel has nothing to do with the words Star or Day or Morning or Bringing or Carrying. Notice also that he is the son (Hebrew = the product) of the morning (Isaiah 14:12). Christ is the Morning Star and it is He who created Satan. And Satan has deceived all of mankind into giving him the exalted title, which is what it really is, and which rightfully belongs to Jesus Christ, of Light-Bringer. One clear fulfillment of Revelation 12:9.

15. Paul explained this in 2 Corinthians 11:14, where he tells us: ... for Satan himself is transformed (Greek = disguised) into an angel of light. Do you grasp this? He has deceived the world into believing that Isaiah 14:12 tells us that he used to hold Christs job (as per 2 Peter 1:19) that he used to be an angel who was a Light-bringer.

16. Once you get rid of the old paradigm that Lucifer is a name that used to refer to Satan and grasp that the Bible identifies Christ as Lucifer (or Phosphoros in Greek), the Light-bringer, then youll be surprised how many scriptures literally flood into your mind in support of this, e.g.

17. We need to understand that God has absolutely no reason to reveal Satans previous name to us. Why should we have to know it? (Apart from Ezekiel 28:12-15) nowhere in the bible is anything good said about Satan!! Notice that in Ezekiel 28, where God does speak about Satans existence before the creation of man, God reveals that Satan had been an anointed cherub but God does not use any name that previously applied to Satan. Why not? If it was a good name that we should know about, it would have fitted perfectly into this description of Satans prior glory. But Ezekiel 28 carefully avoids hinting at any previous name. And so why should Isaiah 14:12 be an exception by giving us a lofty title that supposedly belonged to Satan at one time, and which Peter in fact tells us is Christs title?

Whatever name Satan may have had previously is totally blotted out before God it is as though Satan never ever had that name. Thats what sin does it totally blots out any memory of any good that went before. Thats what God tells us in Ezekiel 3:20 and 18:24 and 33:13. If the righteous turns away from God, then all his righteousness shall not be remembered. Isnt this plain enough? After Satan sinned, why should God want us to know about Satans supposed good name from a previous time?

18. Satan is the god of this age (2 Corinthians 4:4) who has blinded the minds of people. He has churches and ministers who disguise themselves as ... the ministers of righteousness (2 Corinthians 11:15), a plain reference to them disguising themselves as Christians. Satans universal (catholic) church gave Satan one of Christs names by means of a mistranslation from the Hebrew into Latin. Jerome was clearly working for Satan when he converted the Greek word Phosphoros, used in 2 Peter 1:19 for Jesus Christ, into a personal name for Satan in the Old Testament. Jerome knew that Phosphoros refers to Christ. If he really was a Hebrew scholar, as is generally claimed, then he also knew that Halal also has negative connotations like mad, boast, foolish, etc. because he would have had to translate this word into Latin 165 times. Did Jerome really not understand the context of boasting in this passage?

For over 1000 years this name was used for Satan in the western world. It was placed above question as a former name for Satan. So translators and students of the Biblical languages and of Latin have also accepted this as a fact that should not be questioned. Satan clearly does not want his right to the name Lucifer questioned. Those who use it for Satan show they are worshiping Satan by attributing one of Christs names to Satan.

I could carry on with some more points, but I feel that the above information should suffice to understand that Satan is never referred to as Lucifer in the Word of God. So what about you. Will you continue to refer to Satan as having once been called Lucifer? You now know the facts!

For several years I have posted a selection of Franks many articles, (naturally, the ones I really liked) that were only available to those on his own email list. Others posted some of his other articles. Now, since I believe early 2005, he has his own web site. I always post links: