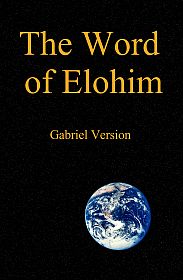 Virtually no one understands that the Word of Elohim (God) simply means what is commonly referred to as the Old Testament and that the Testimony of Yeshua (Jesus) is the correct name for the so-called New Testament. Presumably, I could copyright both of the true inspired names for my own versions of each, but I prefer to use the Word of Elohim, Gabriel Version for my Old Testament and The Testimony of Yeshua, Gabriel Version for my New Testament, because there are scores of translations of these, but none of the translators knew or cared about the inspired titles!