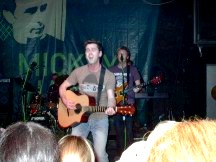 Drumming at the Edge of Magic

The following quotations were made by a master drummer. He loves the drums. I was amazed at the powerful influence of drums after reading this. Selected by a friend.

In the beginning was noise. p.12

Eighty times a year I walk out onto the stage, which is a kind of sacred space. p.230

A Drummer at the Edge of Noise

Even beating on the pad with my fingers I felt it ... there was a little pop! of something like adrenaline, only in my head. p.143

We were pushing the edge of noise, unwittingly activating our adrenals ... there was a physicality to the music .... After a particularly loud set people couldnt walk or talk right; their speech was slurred. p.138

The song disappeared beneath these torrents of noise .... Youd be out on the edge with this roaring animal all around you and it was always an open question whether it was going to go back into its cage or not. Then someone would remember the song or start another one, and all the dangerous possibilities would evaporate. This seemed to happen every other song in the early days. p.138

We were becoming a big noisy animal that made music when it breathed. We were also getting louder. That was another of our missions. p.144

Everywhere you look on the planet people are using drums to alter consciousness. p.28

Ive discovered, along with many others, the extraordinary power of music, particularly percussion, to influence the human mind and body. p.30

A damaru is ... a clapper drum ... Its not played with either the hand or a stick, but shaken. The most distinctive damarus are made from human skulls. p.15

Its Tibetan, really old ... Its a power drum. My friend pushed the little skull drum across the table, encouraging me to feel how easily the delicate crania fit the palm of my hand. I shook it .... The sound was much bigger than I had expected .... Whod have thought our skulls were so resonant? ... I played it for ten or fifteen more minutes .... I set it back on a shelf and then went and threw up. p.179

I soon began ... injuring myself in minor but annoying ways; it gradually felt as if everything in my life was starting to unravel. It was only after several weeks of such uncharacteristic misfortune that I suddenly remembered the odd little Tibetan drum ... I wanted the thing out of my house ... Bandmate Phil Lesh ... took the drum off my hands, but two weeks later the phone rang. It was Phil. Mickey! I want you to come over and get this drum right now. I dont want it here another minute .... Why dont we give it back to the Tibetans..... We grabbed the damaru, jumped into the car, and drove as quickly as we could to Berkeley .... After a few minutes consultation among the monks .... I walked forward and handed the head lama our damaru .... Then he turned to me. I hope you have been most careful, Mickey Hart. This is a drum of great, great power. It wakes the dead, you know. p.180

The Spirituality of Drumming

Drums have two voices. One is technical, having to do with the drums shape ... material ... and the standard way its played. Technique gives you this voicethe drums sweet spot. It takes commitment and apprenticeship to learn how to find a drums sweet spot. But once you do, the potential arises for contacting the drums second voice ... the spirit side of the drum. p.18

Percussion was almost universally used during such rituals of transition as birth, puberty, marriage, and death, when the spirit world is called upon for guidance. p.112

I awoke to the fact that my traditionrock and rolldid have a spirit side. p.212

[The] group established a deep groove of enormous power .... This was not entertainment. This wasnt a stage show. This was serious, this was some sort of invocation. But to what? p.212

[They] have the idea of the crossroads, the point where the spirit world and this world intersect. Certain things attract the spirits to a crossroads. One is music. p.242

I was opening to the animal powers, to what Rolling Thunder called the spirit side. p.157

When Rolling Thunder was in residence, one of his sons would rise at dawn and wake the place with a barking cry. Hooowwwooooohhh. p.157

It would be years before I would connect Rolling Thunder with the shamanic tradition that stretched back in an unbroken line to the deep Paleolithic. p.158

Shamanic Key to the Other World

The word shaman ... is used to describe individuals ... who can enter into a trance in order to communicate with the spirit world. p.161

A few years ago ... I thought shamans were like stage magicians, using all sorts of tricks and ventriloquism to fool people into believing they had special powers. Now I know better. p.161

Shamans are drummerstheyre rhythmists, theyre trance masters who have understood something fundamental about the nature of the drum. p.163

Most of the examples of percussive trance fell into two broad categories. In the first, drumming was used to summon the spirits or the gods down into the body of someone other than the drummer, usually a dancer .... the classic example is vôdun (voodoo). p.163

A shaman is someone who has undergone a symbolic death and been reborn into a higher integration. p.166

Beating a drum or shaking a rattle, a shaman sings the songs that alert his spirit allies that they are needed. p.167

For the shaman, the drum is not so much a musical instrument as a vehicle for transportation. p.171

None of my friends talked about shamans, and yet thats what we were all trying to become ... intent only on the thrill that came from playing in these dangerous spaces so far above the ground. p.174

Since childhood ... playing a drum ... stimulated a feeling of lightness, happiness, timelessness. In another culture, my capacity to access these states might have resulted in my becoming a shaman .... I might have been taught how to ride my drum not into the rock and roll groove, but out of my body to ... where the animal powers live. As it was, I had glimpses of these powers in the drums Id collected, but until now I had never really understood what they were. p.174

I know that its possible to ride the rhythms of a drum until you fall into ... the beginnings of trance. When Im drumming, I like to get as close to this state as I can ... There have been many times when Ive felt as if the drum has carried me to an open door into another world. p.176

When the shaman reaches that door, he sings his songs and the spirit allies come ... Percussive noise might be helpful in inducing trance, but it was rhythmic entrainment that enabled the shaman to actually move into this spirit world ... This, I think, is the drums function. p.177

You dont want to be possessed by just any spirit, so great care must be taken that only the correct spirit takes up residence. The way this is accomplished is with the drum. Particular rhythms are supposed to attract particular spirits. p.204

I belong to ... a group of people ... who get together to think the same thoughts. We sit in a circle and there are drummers playing certain rhythms. The spirits come down into the body of the medium and you can talk to them .... And they know all about you. You cant fool them. p.221

I was baptized in the spirit by Shango, so I am a son of Shango. But there are thousands or millions of spirits who belong to the Shango level ... so when we say Shango we mean all the spirits around the world who are on that level. p.222

Africa and the Invisible Counterplayers

By trying to stop [voodoo] ... in the New World, African music and dancing was presented both for Africans and whites as an end in itself, a form on its own. By separating the music from its religious intent, the century-long gestation began that would ultimately produce the dominant popular musical styles of the twentieth centuryjazz, the blues, rhythm and blues, and rock and roll. p.224

Looking back on the early years of rock and roll now, I can see why the adults were scared. The screams, the ecstatic states, the hysteriathis music had a power that adults didnt understand. We didnt even understand it ourselves, but we werent as scared of it as they were. p.228

In Africa musicians are never possessed by the spirits they call down with their rhythms, so what possesses our audience I can never know. But I feel its effects. p.230

Here is an interesting related link.